op september 30, 2016
In september 2016 I shared my experiences as a feminist in a personal letter with 50 participants of the AGORA '16 Young Feminist Summer School of the European Women's Lobby. I - Arina Angerman - started my conscious feminist journey in 1979 when I discovered The Second Sex by Simone de Beauvoir. I bought my Penguin Book in February and read the “Translator’s Preface” and “Introduction”. At that time I studied social and political history of the 20th century in Groningen, the Netherlands, and became an active member (volunteer) of the women’s history movement in the Netherlands.

Looking back as an ‘experienced’ feminist activist I want to share with you as readers (F/M) of this blog two big challenges & inspiring experiences in my life: Internet & Financial independence for women.

1.     Internet is a new opportunity
In 1995 as an expert participation of women in political decision-making

I was in between jobs and had a big challenge. I found a new inspiring
opportunity in the world wide web! In 1995 I participated as a volunteer in
the NGO Forum in Huairou during the United Nations 4th World’s Women Conference in Beijing (China). In Huairou I started sending emails (blogs) and learned how to use the world wide web (Internet) by developing my digital skills. At the photo below I’m the woman with the cap.

2.     Financial independence for women
My most challenging experience was always and still is to be financial independent as a woman. I have earned money for more than 20 years as a project (program) manager or managing director (1988-2010) by working four days a week. I have had ten different jobs by which I contributed to my personal pension. In 2015 I learned that I have a state pension gap of two years! That’s why I now have different types of income: a personal pension, work as an entrepreneur and a part time job as telemarketer. In hindsight I was able to end my love relationship with a man when I was 30+ and another man when I was 40+ because I was a feminist and financial independent.

What I know now and what I couldn’t have known when I was 25 years old: one out of three women have experienced sexual and/or physical violence in the EU. Lifelong learning of new skills can play a great role to improve women’s economic rights and independence.

Update september 2019
My different types of income are changing. I receive a 2nd personal pension. My state pension gap diminished by 8 month. And I stopped my part time job as telemarketer. I'm still financial independent and am representing IAW in the Board of EWL 2018-2020. 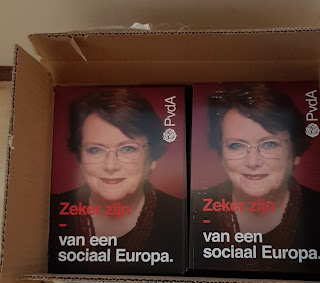