One of the strategic objectives of the Beijing Platform for Action '95 is ‘Increase the participation and access of women to expression and decision-making in and through the media and the new technologies of communication.’ In 2015 the (inter)national community is celebrating the 20th anniversary of this fundamental human rights instrument for women and girls adopted in 1995.
Did you know that only 16% of photos in European newspaper show women over 45 years of age (according to the project “You can’t be what you can’t see”)? In the EU, women account for only 24% of people that we hear and read about in the news. Only 4% of the news coverage is against stereotypical portrayel. Note 1 In May 2015, European Women's Lobby (EWL) demands ‘Mirror, mirror on the wall …a fair and equal representation of women in the media in Europe’.

#Beijing20 & Twitter
During the past decade, advances in information technology have facilitated a global communications network that transcends national boundaries. One of the challenges is that women who write on the Internet and participate in social media, on blogs and other online forums, meet increasing hostility and harassment. This is a way to silence women’s voices in the public sphere.
At my public sphere Twitter account - @ArinaNoel - I retweeted an infographic of women in the media by UN Women. Note 2 There are around 2 Billion active social media accounts. Roughly half of social media users are women. Feminist hashtags - # - that have added to global conversations on gender inequality are #Beijing20 #HeForShe and #EverydaySexism The # symbol, called hashtag, is used to mark keywords or topics in a Tweet.

How Far are We from Gender Equality?
Representing Vrouwenbelangen I attended a China-Netherlands Dialogue event Paneldiscussion about Women's rights on May 20th 2015 in Amsterdam. Ardi Bouwers presented a report on behalf of Radio Netherlands Worldwide (RNW) on the (in)equality and representation of women in media.
"Bringing media accountability into the struggle for gender equality was the original impetus for the Global Media Monitoring Project (GMMP)... Every five years since 1995, the GMMP has documented trends in the portrayal and representation of women and men in news media discourse and imagery." page 6


Summary of GMMP 2015 Preview ''women's presence in media hasn't changed much in the past 20 years, if this rate of change continues, it will take at least 40 years to reach equality." page 12


Do you want to help IAW at Facebook and Twitter?
International Alliance of Women (IAW) publishes and shares news in accordance with the focus at the website. At the time of writing this blog IAW has at Facebook 757 likes and at Twitter @Womenalliance has 354 followers.
IAW is an international non-governmental, feminist organisation. It works for the empowerment of women, the promotion of women's human rights and gender equality globally. Founded in 1904 and based in Geneva.
IAW has general consultative status to ECOSOC (Economic and Social Council) since the beginning of the UN - 1947.
Do you want to like, share, comment, follow or RT (ReTweet)? Please help us with small actions for gender equality!

Blogger Arina Angerman
is representing International Alliance of Women (IAW) in the Policy Committee of the European Women's Lobby (EWL).
In 1995 Arina participated in the NGO Forum in Huairou during the United Nations 4th World's Women Conference in Beijing. During this NGO Forum she started sending emails as a reporter and learned how to use the world wide web as an activist.
Arina is a consultant in how to use social media as a board member, entrepreneur or manager: Social Media 4 (Baby) Boomers 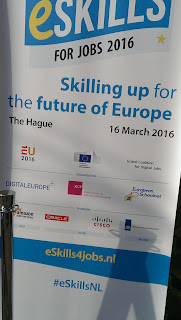